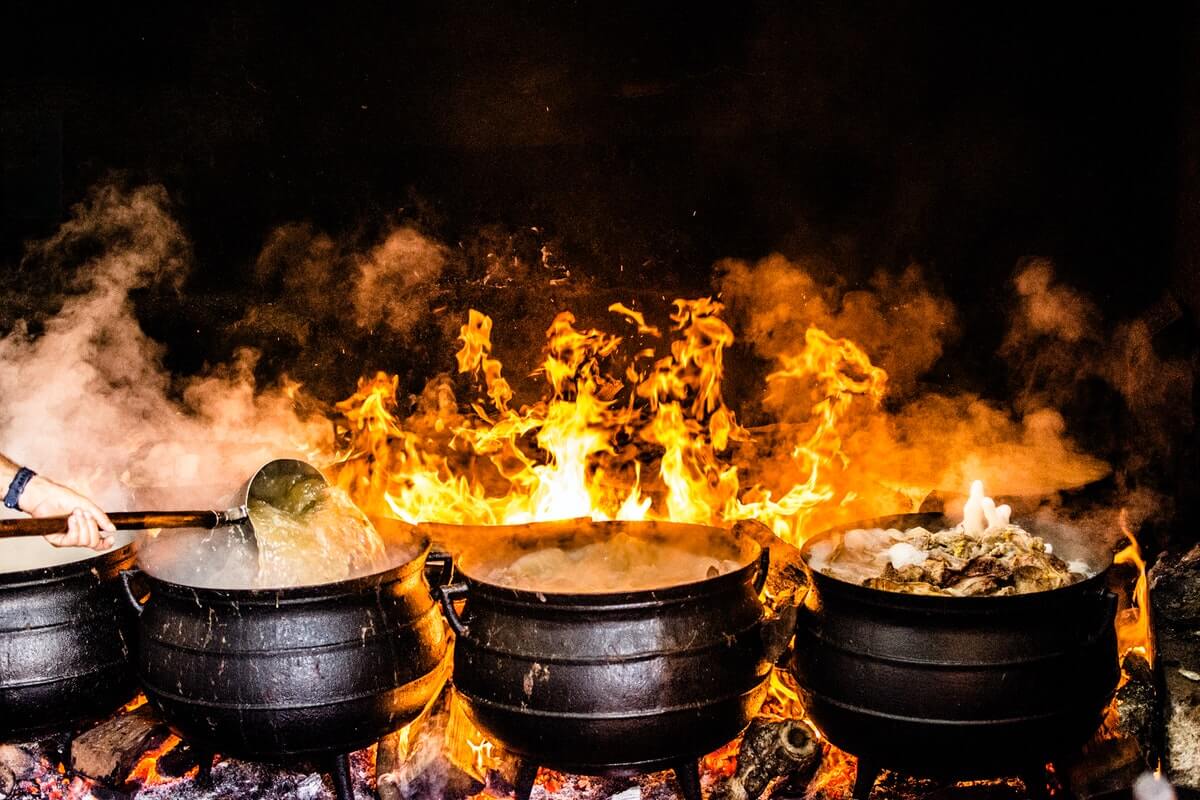 There are utensils for food preparation and cooking that are unique to Africa. Here are some!

In modern Africa, many families have chosen to use kitchen utensils made of metal, ceramic, and other materials, especially when using modern cooking fires, such as electric or gas hobs. However, the traditional clay pot remains a favorite of many.

The traditional pot is made of clay and then baked in an oven. The processes involved in the production of a cooking pot and a pot of water are different, as a pot of water only needs to keep the water cold and not resist fire.

The traditional cooking pot is often used over an open fire, such as a wood fire, in a hearth, or over a charcoal burner. The earthy smell of the pot gives a unique flavor to the food. Fresh beans or meat simmered in a pot taste quite different than when cooked in a metal saucepan.

The insulating qualities of the crock pot also slow down the cooking process, further enhancing the taste of the food.

A mortar used to be standard equipment in many African homes, and often still is. A mortar and pestle were used to crush grains like millet or sorghum to separate the straw from the grain.

The mortar and pestle of Africa are great for a heavy hit, unlike their common counterpart in Western cuisine, which is a small utensil for gently rubbing in spices.

Most African kitchens have a mixer stick, or even an entire collection of them. They are made of wood and come in all sizes and many different shapes. The most common is the flat-headed wooden mixing stick, used for stirring food, but more often for mixing posho, ugali, or kuon – cornmeal or millet flour bread.

Every woman has a favorite mixing stick, which she claims produces the best results!

In many communities, the pumpkin is a special and very useful utensil. A pumpkin is a climbing plant, which produces long or round fruit. When this fruit ripens and dries, it becomes a very useful container. A ripe pumpkin is often brown or golden in color. The woody interior is hollowed out and cleaned.

The Kalenjin of western Kenya use their pumpkins to ferment milk. And of course, each woman has her own favorite pumpkin.

When a pumpkin is cut lengthwise in two, one has two pumpkins, which are very useful for serving drinks. The clean, woody smell of drinking water in a pumpkin is quite unique. In northern Uganda, visitors were often served homebrew in gourds.

Various ethnic communities in Africa also use gourds as musical instruments, including the Acoli of northern Uganda and communities in West Africa, such as in Mali.

A winnowing tray, or several, remains a precious utensil in many African homes. A winnowing tray is woven from reeds and is useful for sorting grain. After crushing or threshing, maize, millet, sorghum, rice, simsim, and groundnuts are winnowed into a tray to separate the grain from the chaff.

In some communities, special reed trays are also used to serve food on festive occasions.

In many communities, a grinding stone was the centerpiece of the kitchen. Some farms had a hut or grinding house, where several grinding stones of various sizes were housed, to grind millet, sorghum or odii. Grinding stones have been gradually replaced by mills.

As in any other kitchen, knives are also important in the preparation of African food. However, traditional knives differ from modern ones. In Uganda, for example, a short double-edged knife was popular for peeling matoke (cooking bananas) and for climbing fish or skinning slaughtered animals.

Every kitchen in the world uses strainers. Sieves in Africa are now made primarily of metal or plastic. Traditionally, they were woven with soft reeds. They were used to sift flour or beer before serving.

In many homes, the fragments of broken pots and broken gourds were valuable utensils. In the Acoli culture, for example, pumpkin fragments were treasured to smooth millet bread before serving. Apparently nothing worked as well as a piece of broken pumpkin. And of course, each woman had her favorite snippets!

Winnowing trays, mixing sticks, pumpkins, strainers, gourds and cooking pots were and continue to be included in the gifts a new bride receives to establish her home.

As new foods and new methods of food preparation become established on the continent, new utensils will also replace old ones. In fact, new labor-saving devices are welcome everywhere.

However, the charm of traditional African cookware cannot always be entirely denied.